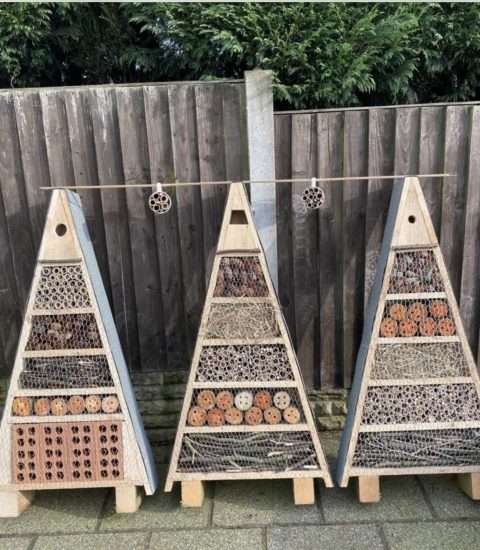 Leek has secured the status as a “bee friendly” town as the result of the efforts of Town and District Councillor Bill Cawley.  The principle of a bee friendly town was fixed by the London based charity ‘Bee Friendly Trust’, who are looking to work with towns around the country to establish more areas to sustain bees and other pollinators. Bee Friendly towns meet certain criteria, such as, creating bee friendly schools, sharing seeds and being creative in supporting bees and other pollinators in gardens and plots . Cllr Cawley contacted the Trust last year and has kept the organisation informed of developments such as the “ Bee Hotel” scheme that he and Cllr Taylor have supported at Westwood First School in Leek. (See photo).

Leek joins Arundel in Sussex, Tring in Herts and Kenilworth in Warwickshire as the first four designated “Bee Friendly “towns

Councillor Cawley said “ It is an honour to receive this recognition. Leek is the most northerly of the four towns . I think it is important to make sure that the award is not seen as tokenistic and we see this as the start of a process and not the end . I think it is important that we have established a group and we look forward to sharing experience and solutions. Things that have worked as well as things that have not worked. After all this is a learning opportunity as much as anything else. We would want to work with local groups such as the well organised bee keeper organisations.  One intention I think all Leek Town Councillors will support is encouraging all the schools in Leek to be a network of eco communities.”

This website uses cookies to improve your experience while you navigate through the website. Out of these cookies, the cookies that are categorized as necessary are stored on your browser as they are essential for the working of basic functionalities of the website. We also use third-party cookies that help us analyze and understand how you use this website. These cookies will be stored in your browser only with your consent. You also have the option to opt-out of these cookies. But opting out of some of these cookies may have an effect on your browsing experience.
Necessary Always Enabled
Necessary cookies are absolutely essential for the website to function properly. This category only includes cookies that ensures basic functionalities and security features of the website. These cookies do not store any personal information.
Non-necessary
Any cookies that may not be particularly necessary for the website to function and is used specifically to collect user personal data via analytics, ads, other embedded contents are termed as non-necessary cookies. It is mandatory to procure user consent prior to running these cookies on your website.
SAVE & ACCEPT