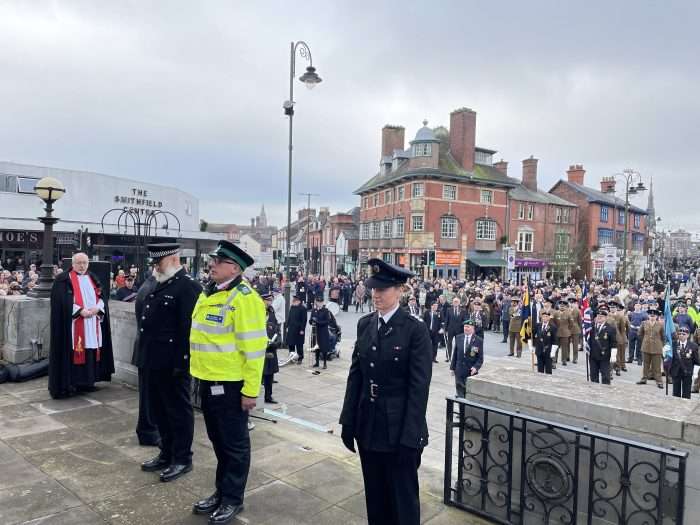 Leek Town Council, in association with the Leek branch of The Royal British Legion, helped support two important events for Remembrance Sunday. In the morning there was a short parade from Silk St to St Edwards Church for a morning service. The parade then led from the Church to The Nicholson War Memorial where a religious service was led by Rev. Nigel Irons from St Edwards.

A large crowd was in attendance, filling Sparrow Park, and the adjacent streets. The town welcomed its many community groups, as well as families, both young and old.

After a formal wreath laying ceremony the parade marched along Derby St, before finishing in The Market Place. Many individuals, as well as community groups, continued to lay wreaths and plant crosses.

Unfortunately Leek Town Mayor, Cllr Lyn Swindlehurst was unable to attend, due to suffering from Covid, but Deputy Mayor, Cllr Bill Cawley, laid a wreath on behalf of the town.

In the afternoon, respects were paid at the Ball Haye Green memorial. Gathering at The Priory, a parade made its way along Novi Lane, before gathering in front of the memorial. The last post was played, followed by a religious service. The parade then marched back along the route.

The Town Council would like to gratefully acknowledge the financial support given by Leek United Building Society and SMDC towards the event costs.

From one of the many tributes.

“As we stand here proud and free.

We honour those who gave their lives for democracy.”

This website uses cookies to improve your experience while you navigate through the website. Out of these cookies, the cookies that are categorized as necessary are stored on your browser as they are essential for the working of basic functionalities of the website. We also use third-party cookies that help us analyze and understand how you use this website. These cookies will be stored in your browser only with your consent. You also have the option to opt-out of these cookies. But opting out of some of these cookies may have an effect on your browsing experience.
Necessary Always Enabled
Necessary cookies are absolutely essential for the website to function properly. This category only includes cookies that ensures basic functionalities and security features of the website. These cookies do not store any personal information.
Non-necessary
Any cookies that may not be particularly necessary for the website to function and is used specifically to collect user personal data via analytics, ads, other embedded contents are termed as non-necessary cookies. It is mandatory to procure user consent prior to running these cookies on your website.
SAVE & ACCEPT